Hendron and Lone Oak Fire Department alerted to respond to the 7800 block of Wice Church Rd for a reported fire in a magnesium manufacturing facility.

While responding Central communications relayed reports of people still in the building and that Magnesium was involved in the fire.

With this report, additional resources in the county were alerted to standby for response to the incident.

Companies arrived to find a confined magnesium fire in a machine and went to work confirming the building was clear of occupants and removing the flaming metal. The Wice Church Command held the assignment with on scene companies, returning others to service. The combusting metal was removed from the building where it was extinguished with special chemical extinguishing agents because a violent reaction occurs with flaming magnesium and water.

All companies worked checking for extension and ventilating the building before returning to service.

Fortunate that this incident was not at extensive as it could have been. 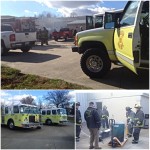