At 0022 hours Reidland-Farley Fire District and Hendron Fire were alerted to respond to the 400 block of Oaks Rd for a reported fire.

Engine 24 responded with 6 and arrived as the second due engine with fire throughout a dwelling behind L32 & E35. The engine crew went to work protecting an exposure and darkening down the fire in the rear before working their line around front and making a push.

The crew operated for about 4 hours before returning to quarters. Strong work to all responding companies.

E24 crew & Chief take a moment upon return to quarters. 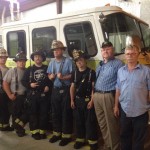 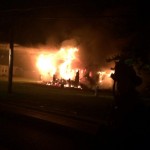