At 1028 hrs Hendron was alerted to respond to 5300 block of Old Mayfield Rd for a vehicle accident involving a power pole with possible electrocution.

Chief 20 arrived confirmed an electrocution and requested the power company with an expedited response. Rescue Engine 23 (Vaughan) with 3 and Unit 26 with 3 responded to the emergency with several more volunteers standing by at the firehouse.

A subject was working on a semi trailer and had extended the roll top cover into the overhead power lines. The electric current traveled down and resulted in multiple burn injuries to the patient. The subject was able to crawl far enough out of the danger zone to be picked up and dragged away by awaiting Rescue Engine members who then transferred care to MREMS. At the transfer of care the patient was able to talk to emergency crews about what happened and the extent of injuries sustained.

Multiple electrical companies responded to mitigate the electrical emergency and removal the vehicle from the lines.

We hope hope for a quick recovery of whom involved and appreciate the quick and professional response from all responding agencies. 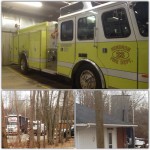